Celebrating Film and Television Depictions of Women in STEM

In honour of Ada Lovelace Day, an international holiday celebrating the achievements of women in science, technology, engineering and maths (STEM), we’re highlighting our favourite depictions of women in STEM in film and TV to spur you to develop your digital skills. Read on for our top picks and what courses on our Digital Skills Programme you can take if you’re feeling inspired.

Based on the book of the same name, Hidden Figures recounts the true story of Black female mathematicians Katherine Johnson (Taraji P. Henson), Dorothy Vaughan (Octavia Spencer) and Mary Jackson (Janelle Monáe), who worked at NASA during the 1960s Space Race. While all three women prove themselves formidable in a white/male-dominated workplace, an especially inspiring storyline shows Dorothy teaching herself and her co-workers programming after NASA installs an IBM 7090 electronic computer that threatens to replace “human computers,” a move that sees her promoted to supervise the Programming Department.

The musical comedy-drama Zoey’s Extraordinary Playlist charts the story of Zoey Clarke (Jane Levy), a software developer at the fictional San Francisco-based tech company SPRQ Point. After an earthquake occurs during Zoey’s MRI, she develops the ability to hear people’s inner thoughts in the form of pop songs. Despite being cancelled after two seasons, the show offers excellent insight into systemic bias in the tech world through its musical numbers, especially in season 2, episode 6, which shines a light on the need for companies to address the sector’s historic lack of racial diversity.

Take: Contextualising digital skills: Equality, diversity and inclusion in tech (19 October) – this brand new course introduces learners to some of the many equality, diversity and inclusion-related issues within the tech world and how you can do your part in dismantling systemic bias. We can’t teach you how to sing like they do in Zoey’s Extraordinary Playlist, but you’ll at least leave with a deeper understanding of why EDI concerns are so central to the evolving tech landscape.

Both these films feature British codebreakers working to decrypt German messages at Bletchley Park during World War II. While The Imitation Game primarily focuses on Alan Turing (Benedict Cumberbatch), it also highlights cryptanalyst Joan Clarke’s (Keira Knightley) integral role in the breaking of the Enigma machine. Enigma, on the other hand, shines more of a spotlight on the Wrens (Women’s Royal Naval Service) working at Bletchley Park, albeit through a heavily fictionalised mystery plot with a terrific Kate Winslet at its centre. Both films are, however, well worth a watch, especially if you’re interested in cryptography.

If you’re into cryptography, chances are you’ll enjoy these Information Security sessions tracking the ever evolving cyber security landscape. Sadly, we don’t have any codebreaking workshops on offer at the moment, but we can offer some helpful guidance on making sure your data isn’t as decipherable as the Enigma machine.

Since October celebrates not only Ada Lovelace Day but also Halloween, we’d be remiss to leave out the 2016 gender-swapped remake of Ghostbusters. This updated version of the story centres on female scientists investigating paranormal phenomena in New York City. While the science of building proton packs is unfortunately beyond the scope of our Digital Skills Programme, we do have a couple of courses that would help with the data visualisation aspect of ghost-hunting.

Take: Microsoft Power BI: An Introduction to Power BI and data ethics (20 October) – this new offering introduces users to Power BI, a business intelligence tool that provides an interactive platform for “non-technical” users to understand data. Maybe if the women of Ghostbusters had used Power BI to create eye-catching and interactive dashboards, they wouldn’t have had such a hard time convincing people that ghosts were real.

You didn’t think we’d end this list without referencing Gillian Anderson’s iconic Agent Dana Scully, did you? Taking TV by storm in the early 1990s, Agent Scully made her mark on girls and women across the globe over the course of nine original seasons (before returning in 2016 for two more) as people tuned in to watch the medical doctor turned paranormal investigator go head to head with monsters, aliens and cigarette smoking men at a time when it was incredibly rare to see a woman in STEM as a leading role on a network television series.

The “Scully Effect,” wherein girls and women were inspired to pursue STEM subjects after seeing Anderson’s character onscreen, was examined in a study by the Geena Davis Institute on Gender in Media, but it’s safe to say she continues to be a role model to countless individuals.

Take: Digital safety: Lessons from Netflix (8 November). You could really watch any episode of The X-Files to see why Scully is awesome but season 3 episode 6 “2Shy” not only shows her as a fighter but also illuminates some dangers of online dating that are still relevant today. As we integrate more digital technologies into our daily lives, just as Scully and Mulder were starting to do in the 90s, it’s more important than ever to take pains to keep ourselves safe, too. Our Digital safety: Lessons from Netflix course uses examples from popular media to illustrate the importance of staying safe while connecting with others in digital spaces.

These resources are all presented by or feature influential women in STEM and are recommended by  the Digital Skills and Training, Information Services Group.

The following resources are all presented by or feature influential women in STEM and are recommended by the Digital Skills and Training team, Information Services Group.

The Digital Skills and Training team have a wealth of resources around the topics of data and programming. Take a look at some of our online resources and webinars below, and book your place to develop your skills in the spirit of Ada Lovelace:

We also have a new ‘Introduction to Programming’ webinar coming up in the next few weeks. Keep your eyes peeled for the pilot announcement!

What is LinkedIn Learning?

LinkedIn Learning is on an online skills development service offering an extensive library of high-quality video courses in business, creative and technical skills. The University of Edinburgh has a campus-wide licence, offering staff and students unlimited access to the service via the web and mobile apps.

A talk for Ada Lovelace Day 2019 by Professor Ursula Martin

We are delighted to announce that our keynote speaker for Ada Lovelace Day 2019 at the University of Edinburgh is Professor Ursula Martin CBE FREng FRSE DSc.

This evening talk is a free event and part of a whole day of activities celebrating the achievements of women in science, technology, engineering and maths (STEM).

Ada, Countess of Lovelace (1815-1852) is best known for a remarkable article about Babbage’s unbuilt computer, the Analytical Engine, which not only presented the first documented computer program, but also, going well beyond Babbage’s ideas of computers as manipulating numbers, outlined their creative possibilities and the limits of what they could do.

The comprehensive archive of Lovelace’s papers preserved in Oxford’s Bodleian Library displays Lovelace’s wide scientific interests, and her grasp of the potential of mathematics as a uniting link between the material and symbolic worlds.

In this talk we start to explore Lovelace, her background, her scientific ideas and her contemporary legacy, and reflective more broadly on the role of history of computing in present day thinking about the discipline.

Professor Ursula Martin CBE FREng FRSE DSc is Professor of Computer Science at the University of Edinburgh, and a Visiting Professor in Mathematics at the University of Oxford. After a career in research and research leadership spanning many aspects of computing and mathematics, she now works on the context, long term development and impact of fundamental ideas in computer science

Programme for the event

We’re less than three months away from Ada Lovelace Day 2019, which is happening on Tuesday 8th October this year.

Pop it in your calendar now and we’ll announce further details about the University’s plans on this website shortly. Once again we have provisional plans for both daytime and evening activities, so we should have at least one event you can hopefully attend.

A regular activity for Ada Lovelace Day (ALD) at the University of Edinburgh is the Wikipedia editing event or editathon. This year the focus is contemporary women in STEM who do not currently have Wikipedia pages.

Who is your STEM heroine?

It’s a little over three months until Ada Lovelace Day 2018, which is happening on Tuesday 9th October this year.

Pop it in your calendar now and we’ll announce further details about the University’s plans on this website shortly.

There are 20+ high-resolution photos capturing the guest speakers from the morning and the afternoon STEAM activities. All images are licensed under a Creative Commons Attribution 4.0 International License. 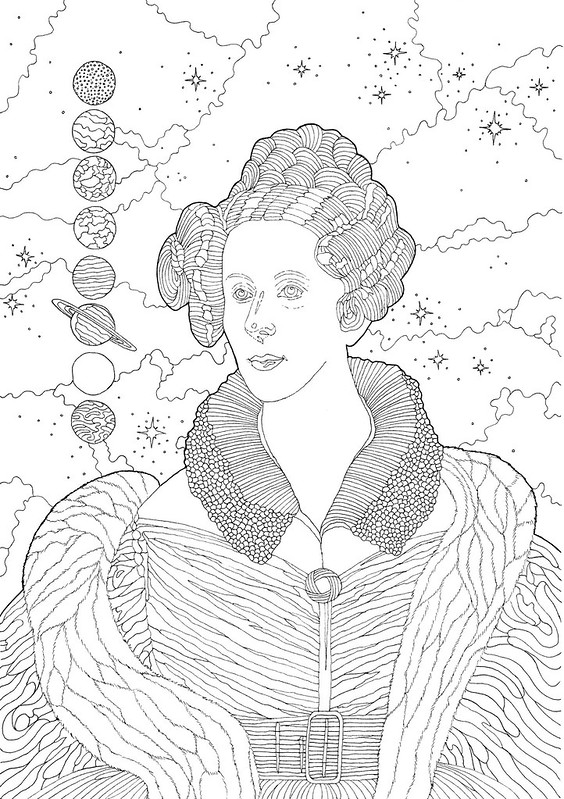 Ewan McAndrew, The University of Edinburgh’s Wikimedian in Residence, has kindly curated a selection of Tweets from the day into the following Storify stream.

Mary Somerville was a mathematics tutor to Ada Lovelace and this artwork is titled ‘Mechanism of the Heavens’ after her 1830 publication on celestial mechanics.

On Tuesday 10th October 2017, the University’s Information Services team are running an edit-a-thon to celebrate Ada Lovelace Day 2017 which is an international celebration day of the achievements of women in science, technology, engineering and maths (STEM).

This year the event will have a particular focus on Women in Chemistry and #ALD2017 is to be hosted, for the first time,  smack dab in the university’s Science and Engineering quarter in the James Clerk Maxwell Building.

There will be a range of guest speakers in the morning followed by fun technology activities from 11am to 2pm. Full Wikipedia editing training will be given at 2-3pm. Thereafter the afternoon’s edit-a-thon will focus on improving the quality of articles related to Women in STEM!

In particular, our editing will focus on the 19 petitioners denied admission to Royal Society of Chemistry in 1904 as evidenced in this article: Pounding on the Doors: The Fight for Acceptance of British Women Chemists. #WeCanEdit.

The day will close with Professor Polly Arnold, the Crum Brown Chair of Chemistry and winner of the Rosalind Franklin Award, introducing the short film, A Chemical Imbalance before taking part in a discussion panel.

All three events are free and open to all so taking part in Ada Lovelace Day is as as easy as 1,2,3.

You can book to attend one session, two sessions or all three.

Book here to attend the talks and fun science/tech activities.

Book here to attend the editathon.

How do I prepare? for the editathon?

‘A Chemical Imbalance‘ is a short documentary film and book that ask why Edinburgh has such a long history of successful female chemists, and why women are still under-represented in all science fields. Following the film, Anne-Marie Scott will chair a panel discussion of the issues raised in the film; namely the low participation of Women in STEM fields and equality in the workplace.

The confirmed panelists are:

Book here to attend the film screening and discussion panel.

It promises to be a great day so come along to learn about how Wikipedia works and contribute a greater understanding of Women in STEM!

It’s less than 5 months until Ada Lovelace Day 2017, which is happening on Tuesday 10th October this year.

Be sure to put it in your calendar now, full details about the University’s plans will be announced nearer the time.

If you have any comments on our 2 previous events, or suggestions for this year please get in touch via the comments section below. Alternatively feel free to email me directly.